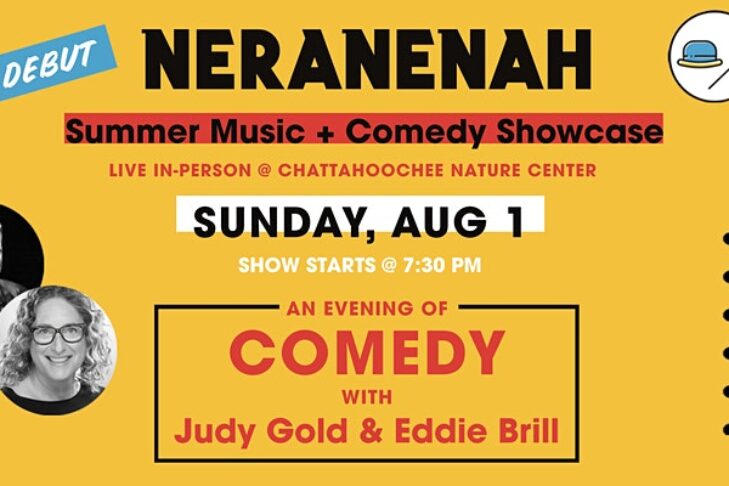 Judy Gold has had stand-up specials on HBO, Comedy Central and LOGO. She has written and starred in two critically acclaimed, Off-Broadway hit shows: The Judy Show – My Life as a Sitcom (Outer Critics Circle Nomination), and 25 Questions for a Jewish Mother (GLAAD Media Award – Outstanding NY Theater, Drama Desk Nomination – Actor). Judy received rave reviews as Gremio in The Public Theater’s all female production of The Taming of The Shrew for Shakespeare in the Park. She also co-starred in Off-Broadway’s Clinton! The Musical, and Disaster! The Musical.

Judy plays the role of Chaya on FX’s Better Things. She guest starred on CBS’ Madame Secretary and on the Showtime series I’m Dying Up Here. She has had recurring roles Netflix’s Friends from College and TBS’ Search Party.

Judy is the host of the hit podcast, Kill Me Now. She has appeared on The Late Show with Stephen Colbert and The Tonight Show. From 1999-2010, Judy was the host of HBO’s At the Multiplex with Judy Gold. Judy also won two Emmy awards for writing and producing The Rosie O’Donnell Show.

Judy has made numerous appearances on The View, The Today Show, The Wendy Williams Show, and The Steve Harvey Show. She often pops up on The Food Network, but please do not mention Chopped All Stars to her, or Rachel vs. Guy for that matter.

Judy’s newest comedy album, Conduct Unbecoming, and her previous albums, Kill Me Now and Judith’s Roommate Had a Baby are available wherever you get your music.

She can be seen in the recent FX Documentary HYSTERICAL.

Judy Gold is the author of YES I CAN SAY THAT – When They Come for the Comedians We’re All in Trouble, released July 2020 from Dey Street Books.

Eddie Brill is a well respected, very funny and talented stand up comedian.

In addition to performing in 46 of the 50 states in the US, Eddie has also done stand-up in England, Australia, Ireland, Scotland, Canada, France, Holland, Dhaka and Hong Kong.

For seventeen years, he worked on The Late Show with David Letterman. He served as the audience warm-up and for eleven of those years he was the Stand Up Comedy Talent Coordinator.

Eddie has taped more than 100 TV shows in six different countries, including ten appearances on The Late Show and on an Emmy nominated episode of the FX hit series, “Louie.”

A 3-time MAC award winner for Outstanding Male Comic in NYC, he has hosted and performed for hundreds of corporate events, including ESPN, Glaxo Welcome. Hyatt Hotels and BMC Software.

He performed on some of the greatest stages in the world including The Shrine Auditorium and Radio City Music Hall.

He has been the audience warm-up for many shows including the “Dana Carvey Show,” “Madigan Men,” “This is Your Life” and for a short time, early episodes of Saved By The Bell.”

He has appeared in numerous films as an actor, including, “30 Years To Life” with Tracy Morgan. He has used his voice talents in many animated series including Comedy Central’s “Dr Katz” and ABC’s “Science Court.”

Eddie produces and helps book stand-up talent all over the world. He was the architect and for the first ten years, was the creative director of the wildly successful “Great American Comedy Festival.” It honors Johnny Carson in his hometown of Norfolk, Nebraska.

He had assisted in booking the US acts for the International TV show, “The World Stands Up.”

He also ran the incredibly popular “Paper Moon” comedy club in NYC that gave many comics their first big break.

Along with Norman Lear in 1978, he helped create one of the first ever college comedy writing departments in the country at Emerson College in Boston.

He also helped create the Emerson Comedy Workshop, founded in 1976, which continues to thrive today. He currently teaches a highly acclaimed stand-up comedy workshop worldwide that helps comics young and old to take their comedy work to the next level.

He is often called upon to help punch up film and comedy scripts.

Eddie hosts, performs and helps raise money for many benefits including The Roberto Clemente Foundation (for underprivileged children), The David Ortiz Children’s Fund, Sisters in Survival (women with Breast cancer). Juvenile Diabetes, The American Cancer Association, and with Reader’s Digest and St. Jude on Stand-Up for the Children.

How to Handle Re-entry Anxiety