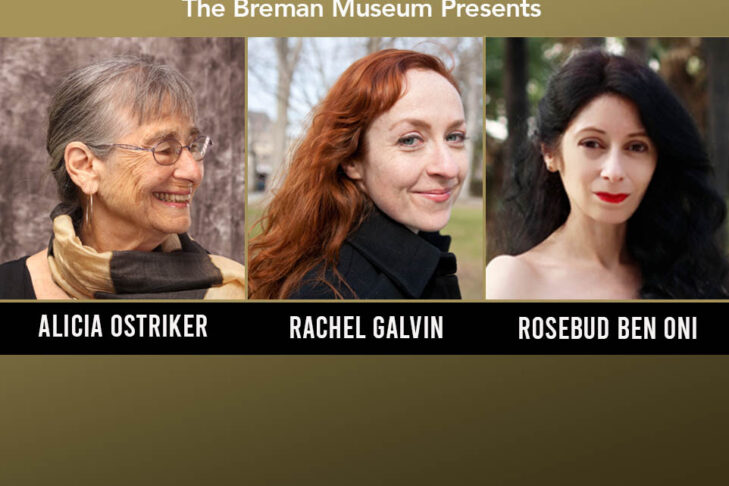 The Breman Museum and Poetry@TECH Present

This program will be virtual and will begin at 7pm EST. Our virtual doors will open at 6:45pm EST. Zoom Links will be provided.

Alicia Ostriker is the winner of the National Book Award, finalist for the National Book Award, Chancellor of the Academy of American Poets and the Poet Laureate of New York State. She is an author of seventeen books of poetry and her work has appeared in The New Yorker, The Atlantic, Paris Review and elsewhere. Everywoman Her Own Theology, a volume of essays about Ostriker’s poetry had been published by University of Michigan Press. Read a sample of their work here.

Rachel Galvin’s poetry appears in The New Yorker, The Nation, Boston Review, and Poetry magazine. Galvin is the author of several books of poetry, including Uterotopia, forthcoming in December from Persea Books. Her translation of Raymond Queneau’s Hitting the Streets won Scott Moncrieff Prize for Best Translation and was named the year’s best book by Boston Globe. Her translation of Oliverio Girondo’s poetry was a finalist for the National Translation Book Award. She was a Mellon Fellow at Newberry Library and is currently an Associate Professor at University of Chicago.

You can read samples of their work here and here.

Rosebud Ben Oni – Born to a Mexican mother and Jewish father, Rosebud Ben Oni is the finalist for the National Jewish Book Award and the winner of Alice James Book Award. In May 2022, Paramount commissioned her to create a video essay, “My Judaism is a Wild Unplace” for campaign for Jewish Heritage Month, which appeared on Paramount, Smithsonian Channel and many other networks. Her poem “Poet Wrestling with Angels in the Dark” was commissioned by the National September 11 Memorial Museum in NYC. For her poetry, she has also received the New York Foundation for the Arts grant and CantoMundo fellowship. You can read a sample of their work here.