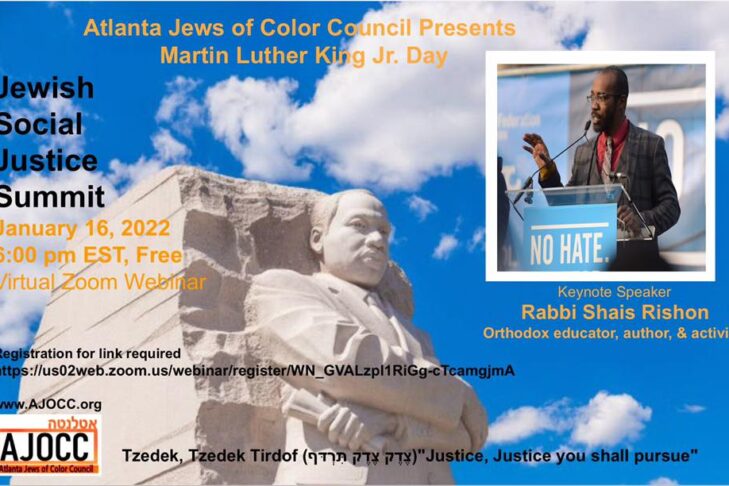 Prior to the work of MLK that created the Civil Rights Act, it was ok to discriminate against Jewish people for education, for jobs, for places to live, for social associations and even in stores. Before the civil rights act, Jews survived but afterwards, we thrived. And this would not be so for American Jews, if not for Dr. Martin Luther King Jr. It is a holiday to be celebrated for all Americans as a reminder, that the work is never finished, this is an eternal fight.
Join the Atlanta Jews of Color Council as we welcome keynote speaker orthodox Rabbi Shais Rishon (Manishtana) to lead us in meaningful respectful dialogue regarding social justice through a Jewish lens.
A New York-based African-American Orthodox Jew born from two African-American Orthodox Jewish parents, MaNishtana grew up Chabad-Lubavitch and hails on his mother’s side from a legacy of African-American Judaism stretching into the 1780’s. biopic
MaNishtana has appeared in both national and international press–including the New York Times, New York Magazine, the Jewish Week, the Jerusalem Post, Tachles, D La Reppublica, Unleash the Fanboy, and others–and has appeared on film in the documentaries Punk Jews (2012) and Doing Jewish: A Story From Ghana (2016). He has contributed to the Jewish Daily Forward, Tablet Magazine, and Hevria, and was selected as a presenter to both the BBYO International Convention and for ELI Talks in 2017. In February 2018, MaNishtana earned his first Orthodox rabbinical ordination, and is currently earning his second. Since 2019, he has presented at several Limmud conferences, including Limmud UK, Limmud Oz, and Limmud NY.