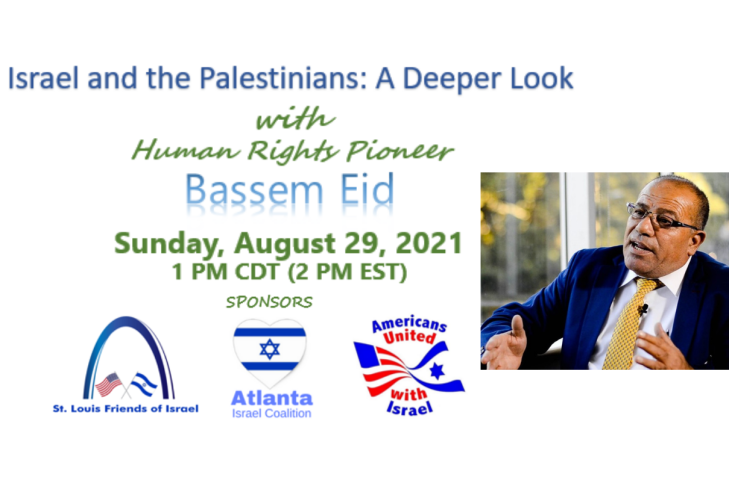 Join us Sunday, August 29, 2021, at 1 PM CDT (2 PM EST) for Israel and the Palestinians: A Deeper Look with Bassem Eid, an enlightening conversation with Bassem Eid to learn a perspective you may have never heard about a conflict everyone talks about.
Please REGISTER in advance for this webinar at https://bit.ly/BassemEid
Thanks to our co-sponsors St Louis Friends of Israel and Americans United with Israel. 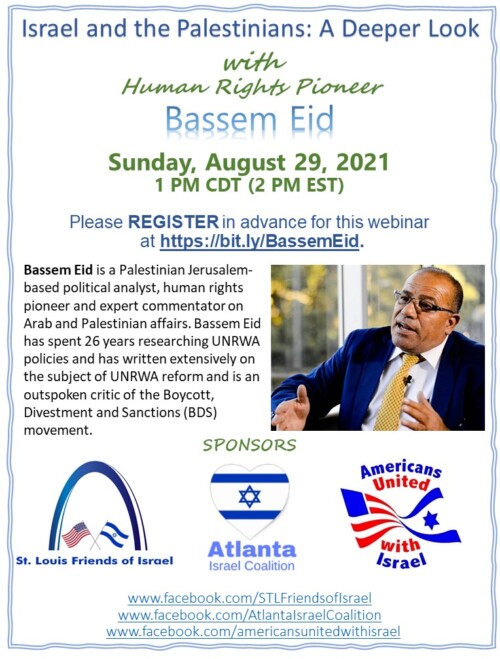 Bassem Eid is a Palestinian Jerusalem-based political analyst, human rights pioneer, and expert commentator on Arab and Palestinian affairs. Bassem Eid was born in the Jordanian-occupied Old City in East Jerusalem, whose place of residence became the United Nations Refugee Works Agency (UNRWA) refugee camp of Shuafat. He rose to prominence during the First Intifada, the Palestinian uprising and was a senior field researcher for B’Tselem, the Israeli Information Center for Human Rights in the Occupied Territories. In 1996, he founded the Jerusalem-based Palestinian Human Rights Monitoring Group. In 2016, Eid assumed the role of chairman of the Center for Near East Policy Research. Bassem Eid publicly condemned the widespread murder of Palestinian dissidents, often for reasons unrelated to the Intifada. In 1995, following his report about the Palestinian Preventive Security Service (PSF), he came under attack by some Palestinian leaders for revealing human rights violations committed by the Palestinian Authority (PA). Arrested by Arafats’ Presidential Guard (Force 17), he was released after 25 hours following widespread international condemnation. Bassem Eid has spent 26 years researching UNRWA policies and has written extensively on the subject of UNRWA reform and is an outspoken critic of the Boycott, Divestment and Sanctions (BDS) movement. 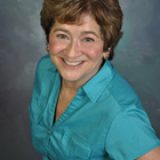