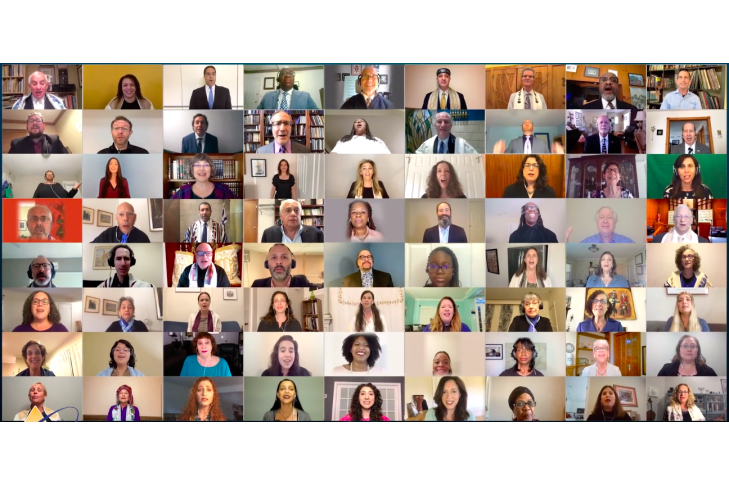 In an effort to promote peace through harmony, more than 100 faith leaders came together to produce an interfaith, multiracial virtual video that unites the voices of Black and Jewish prayer leaders from around the world. The Cantors Assembly, an international membership group of Jewish Clergy, came up with the idea for the “Voices for Change” video as a way to build bridges among the Black and Jewish communities through music following the murder of George Floyd by police violence in May.

The song “Total Praise” – written by African American gospel artist Richard Smallwood – was sung individually by a group of Cantors and Black prayer leaders and integrated into a 3 ½ minute video that will be used to promote peaceful healing while simultaneously benefiting music-related scholarships for the Afro-American Music Institute. The musical piece, Total Praise, is based on Psalm 121 and is a well-known anthem to many in the Black community. The Grammy-award winning Mr. Smallwood, who believes in the promise of this project as to lend his talents, served as conductor. (See lyrics at the end of this release.)

Watch the video HERE. The Cantors Assembly and Black faith leaders are asking that the video be played and/or shared in all houses of worship.

“I am honored and humbled to be a part of this amazing collaboration. To direct my composition  Total Praise that features my Jewish and African American brothers and sisters standing together in solidarity is something of which I am immensely proud,” said Mr. Smallwood. “I pray that this will help to inspire, encourage and bring healing to all people everywhere.”

The song “Total Praise” was originally composed in 1996 and promoted faith and healing. “We can all lean in on faith and music to heal,” said Hazzan Alisa Pomerantz-Boro, immediate past president of the Cantors Assembly and who thought of the idea. Hazzan, the Hebrew word for Cantor, literally translates as “visionary” and is ordained as a fully functioning Clergy person of the synagogue. In addition to leading worship services, Cantors perform all life cycle events, teach, counsel, do pastoral work, and use music and prayer to bring people close.

“We believe in the power of music to elevate and transform, so that people of all ages will feel more deeply connected to one another, to God and to their own sense of purpose,” said Pomerantz-Boro.

Eliezer Katzoff of Stormport Productions served as video producer to create the video with voices from people in the United States, Canada, Uruguay and Israel.

This is believed to be the first time that Jewish and Black music ministers have come together for a collaborative video production. Pastor Eric Manning of Charleston, S.C., and Rabbi Jeffrey Myers of Pittsburgh, Pa., will introduce the musical piece with a brief discussion about why faith is now more important than ever. Being able to demonstrate genuine love for one another, in the fashion of Rabbi Abraham Joshua Heschel and Rev. Martin Luther King Jr., who denounced in 1963 the Soviet Union’s treatment of its Jewish population by restating that “injustice anywhere is a threat to justice everywhere.”

The video highlighting voices for change will be shared on various social media platforms and can also be viewed on the Cantors Assembly website and its Facebook page.

“We want to show solidarity and support with our Black brothers and sisters and believe our voices can be used to create positive change in the world. Music is more important than ever,” said Rabbi Hazzan Jeffrey Myers, who has served as the Rabbi and Cantor for the Tree of Life Congregation in Pittsburgh since the summer of 2017. Myers, an active member of the Cantors Assembly, also previously served on its Executive Council.

“Music has a way of bringing different communities together, providing healing and encouragement to communities that had suffered trauma,” said Reverend Eric Manning, pastor of Mother Emanuel AME Church in Charleston, S.C. “With our communities coming together to sing total praise, we celebrate our ‘oneness,’ the fact that there is more that unites us than divides us and that our combined histories are interwoven together.”

As background, within days of the Oct. 27 attack at Tree of Life which killed 11 worshippers, Pastor Manning (whose congregation experienced its own tragedy in 2015 with the murder of nine worshippers) reached out to Rabbi Myers and the two have since become friends, continuing to inspire and provide strength to one another. The two faith leaders—Rev. Manning and Rabbi Myers—introduce the “Total Praise” ensemble video which is followed by a pre-recorded conversation on issues of faith, race and actions needed to forge better relationships.

About the Cantors Assembly

The Cantors Assembly promotes the profession of the Cantorate, serving its 650 members and their congregations by supporting colleagues in their roles as vibrant, engaging, vital clergy and musical leaders. It offers its members opportunities for mentorship, professional development and personal growth, and is affiliated with the Conservative/Masorti movement, serving congregations from across the denominational spectrum. It seeks to ensure that its members are fully prepared to lead synagogues and the whole Jewish community through an ever-evolving musical and spiritual landscape.