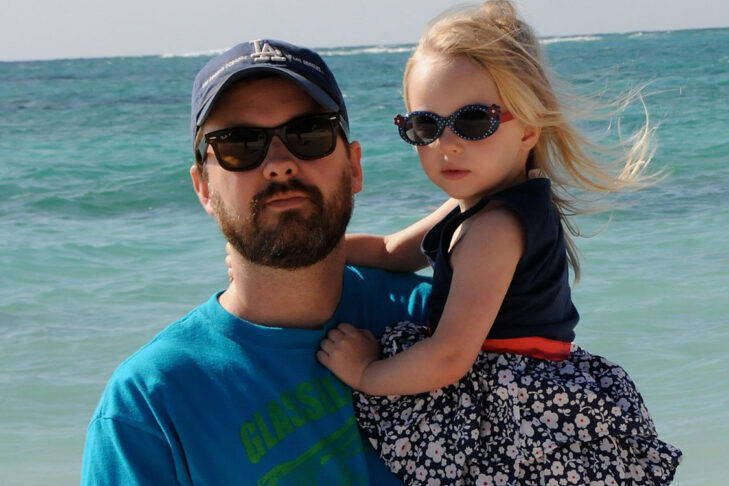 In March of 2020, our world was thrust into uncertainty as the COVID-19 pandemic hit the country in full force. At JF&CS, our agency stepped up when most of Atlanta shut down, providing essential services in a time when our community needed it the most.

Now, we are celebrating our community’s resilience with our second annual Community of Giving: A Virtual Gathering on November 30 at 12 pm, featuring a very special guest, Matt Logelin.

Logelin is the “accidental author” of the New York Times Best Seller, Two Kisses for Maddy: A Memoir of Loss and Love. Logelin tragically and suddenly lost his beloved wife, Liz, 27 hours after the birth of the couple’s first child. He struggled to raise his baby daughter while still reeling from the loss of his wife. But through the strength of community, of meeting with other bereaved families through his blog, he learned how to get through the pain, and give his daughter the love and care she needed.

His words have inspired thousands of people to embrace the love and joy life has to offer, to handle unexpected curveballs with dignity and strength, and to never lose faith in yourself.

In a brief call we had with him, Logelin gave us a short preview on his COG discussion:

JF&CS: Did you have any idea the book would be this successful?

Logelin: Not at all. I don’t consider myself a writer, even now. When I was little, I wanted to be a fisherman! I thought I would sell 150 copies of my book at most.

And what surprised me even more was when I started getting movie offers before I had even finished writing the book. Originally, Hallmark and Showtime had expressed the most interest. Then, out of the blue one day, my agent says Sony wants to buy the book. They started filming in 2019, and even then it felt surreal, like the movie wasn’t even really going to happen.

JF&CS: How did your daughter, Maddy, feel about the book and the film?

Logelin: We watched the movie before it was released. She was about 13 at the time. After we watched it, she gave me a hug and told me that she felt like she finally understood what I had gone through. It was so moving for me to hear that from my daughter, and a testament to Hart’s acting abilities to be able to convey that deep emotion despite being mainly a comedic actor.

As far as the book goes, Maddy was only three when it came out, so she didn’t really have any awareness of it or what was going on. When we began seeing it in public, she would want to bring it home whenever she saw it. I told her “Uh, no, we have 50 copies at home!” But I felt so humbled that she wanted to buy my book.

JF&CS: What’s one piece of advice you would give your younger self, or someone else?

Logelin: Enjoy your life as much as possible. Don’t put too much pressure on yourself. Sometimes bad things happen, and sometimes good things can come out of it. I never dreamed I would write a book, or that it would be turned into a movie. I just wanted to write something so that my daughter would know about her mother, and the life that came before her. Take life as it comes, and be open to opportunities you didn’t expect. You never know what tomorrow will bring.

Want to hear more? Join us for Community of Giving on November 30 when Matt Logelin will be interviewed by Dr. Matthew Bernstein, Goodrich C. White Professor of Film and Media Studies at Emory University.