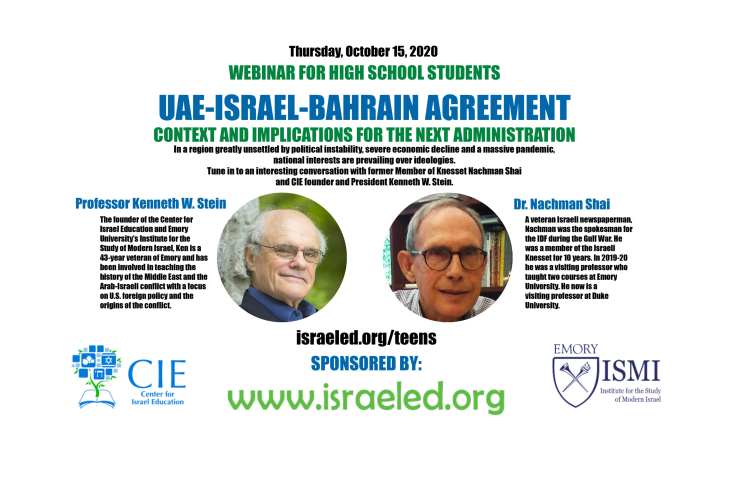 The series of diplomatic agreements known as the Abraham Accords represents “a big breakthrough in Israel’s history and in the history of the Middle East,” former Knesset member Nachman Shai told an online audience October 15.

He was speaking during a special Center for Israel Education webinar in which he and CIE’s founder and president, Ken Stein, addressed the background and context of the accords, which brought normalization to Israel’s relations with Bahrain and the United Arab Emirates and created a framework for additional nations to recognize Israel.

Such normal relations, Shai said, have been a dream of Israel since its founding.

Although the free online discussion was open to all, most of the attendees were teenagers. The session served as a preview of the learning they could expect from CIE’s November Teen Israel Leadership Institute, and teens contributed insightful questions.

Noting that the webinar was happening on the 50th anniversary of Anwar Sadat’s taking power in Egypt, Stein recalled that Sadat brought a fundamental shift to Middle East relations when he put Egypt’s interests above Arab ideology. That meant prioritizing the return of the Sinai and the end of the costly conflict with Israel over a commitment to destroy Israel and restore Palestine.

Similarly, he said, the UAE and Bahrain “have reached an agreement with Israel not based on ideology, but based on interests.”

Those interests include economic ties, tourism, security and intelligence cooperation, access to Israeli expertise in technology and agriculture, and the investment of oil wealth, Shai remarked. By bringing secret ties to Israel into the open and formalizing and expanding them, UAE and Bahrain are saying: “We care very much for the Palestinians, but we care more for ourselves. We now see the future of our people, and we want to go forward. And for that, we need Israel.”

Geography is crucial: Just as Iran has extended its effective reach to Israel’s borders through its support for the Assad government in Syria, Hezbollah in Lebanon and Hamas in Gaza, so official cooperation with the UAE and Bahrain gives Israel allies situated across the Persian Gulf from Iran.

For years, because of their geography, Bahrain and the UAE have built strong military relationships with the United States, as has Israel. Those shared U.S. connections could permit a loose alliance system to be structured with Egypt, Jordan and other Gulf states under a Biden administration. Stein and Shai noted that the practicalities of national interests are likely to lead other Arab and Muslim states to make similar agreements with Israel. “From the Israeli perspective, we are ready to do almost anything,” Shai speculated. “It’s not a partisan matter.”

There’s an evident message for the Palestinians: Accept Israel as a reality and find ways to move forward toward a resolution of the conflict for your own long-term betterment.

“We would like to be an integral part of the Middle East, and that’s what we are heading to,” Shai concluded. “After the last few months, there is a lot of hope and optimism in the air.”

Please visit israeled.org/whats-behind-israels-accords-with-uae-and-bahrain to watch the full video. You may read more about the accords at israeled.org/the-abraham-accords-us-uae-israel-and-bahrain. 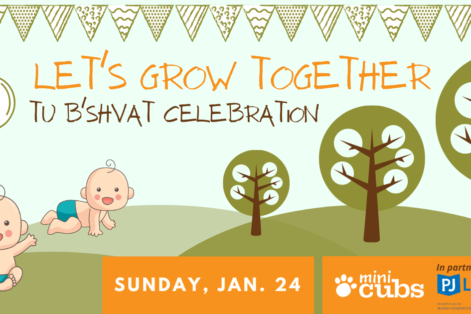 Come Celebrate Tu B'Shevat! Be With Nature! Join us for the Post Race Activities that include a Bonfire, Music & Falafel Food Truck. Event Day Registration opens at...
Free
Edit