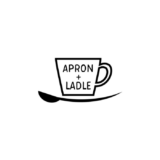 The sibling team of Nik Panagopoulos and Artie Antoniades are back in Sandy Springs!

Having solidified themselves in the Sandy Springs community for the past 10 years with Tin Can Fish House and Teela Taqueria, they are excited to bring their European flare to this breakfast and lunch concept, reminiscent of the Deli cafés from their Greek and South African heritage.

With input from top interior design firm, Sims Patrick Studio, the space has been transformed into an attractive contemporary yet inviting dining spot with warm teal walls and modern accents.
Diners entering the Apron + Ladle will be greeted by the whiff of freshly brewed illy Italian coffee and seasoned baristas serving a selection of cappuccinos, lattes and espressos.

The ever creative, brother sister team wanted to bring a twist on your regular breakfast fare by introducing gourmet filled biscuits to Sandy Springs – think Spicy Chicken Benedict with Turkey Bacon Of course, lighter fare such as Avo toast and Chia Pudding are part the delectable breakfast selection, while lunch is a balance of deli sandwiches such as hot pastrami on rye, and lighter fare such as the ever popular curried chicken salad sandwich on a croissant.

Apron + Ladle offers the best of both worlds – join your friends and be served in the main dining room or for those in a hurry, or who prefer a more casual setting, pop into the adjacent café with complimentary Wi-Fi and internet connection and grab coffee and a pastry.

The children’s menu has also been crafted with thought and an emphasis on healthy choices, including Turkey and Cheese sandwiches with apple slices.

By YIVO Institute for Jewish Research

What better way to wish family, friends, and business associates a “Sweet and Healthy New Year” than sending honey? And raise funds for B'nai B'rith Atlanta at the same...

Making A Difference: Farmers & Fishermen Is Feeding The Community with A Commitment To Excellence

CEO Kirk Halpern of Farmers & Fishermen has built one of the most impressive Atlanta companies making a difference.
By Robyn Spizman

Tell Jewish Atlanta why your mother deserves flowers, candy or a day at the spa and WIN!

Submit 200 words or less, telling Jewish Atlanta why your mother deserves flowers, candy or a day at the spa.

Bringing You an Interesting and Timely Conversation Each Month.

Sign up for your Free Atlanta Jewish Times Home Delivery Service: Limited to this time of social distancing.

Fresh Food to Your Door

Meat and seafood supplier expands from restaurant service to home delivery for those stuck in their homes.

The Atlanta Community Food Bank’s mission to provide nutritious food to the people who need it has reached a major milestone toward access to food for all.

The AJT is covering the COVID-19 outbreak with a focus on what it means to Jewish Atlanta. Follow the AJT for news updates, health information and helpful resources.

Stuck at Home? AJT is Keeping Jewish Atlanta Connected during this time of social distancing

Stay informed with our digital and print distribution directly in your inbox and mailbox.