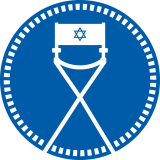 The Atlanta Jewish Film Festival (AJFF) is a cinematic exploration of Jewish experience — Jewish culture and history, life in Israel, and the work of Jewish artists — particularly where these stories intersect with other communities both here in Atlanta and around the world. Seeking to use the power of film to both entertain and educate, AJFF challenges conventional perspectives on complex and challenging issues facing the Jewish and global communities.

The Atlanta Jewish Film Festival (AJFF) is a showcase of international cinema that broadly explores themes of identity, history and culture. The annual festival was founded in the year 2000 by the Atlanta Regional Office of American Jewish Committee (AJC), a global advocacy organization that enhances the wellbeing of the Jewish people and Israel through education, outreach and diplomacy. Through the power and shared experience of cinematic storytelling, AJC and AJFF foster stronger bonds within the Jewish community, and intergroup relations with Atlanta’s diverse cultural, ethnic and religious communities.

The inaugural edition of the Atlanta Jewish Film Festival welcomed some 1,900+ filmgoers. That number grew to more than 7,500 by 2006, the same year that AJFF received a prestigious grant from the Academy of Motion Pictures Arts and Sciences (AMPAS). The following year, AJFF began an aggressive expansion of dates and venues, seating some 15,000 by 2008.

In 2010, AJFF celebrated its tenth birthday with a concert of iconic Jewish film scores, presented in partnership with the Atlanta Symphony Orchestra and Turner Classic Movies. Attendance reached 20,000 by the end of the first decade, and continued growing to over 30,000 moviegoers in the years that followed. By this time, AJFF was exhibiting some 70 narrative and documentary features and shorts, running for 23 days across a half dozen venues throughout metro Atlanta.