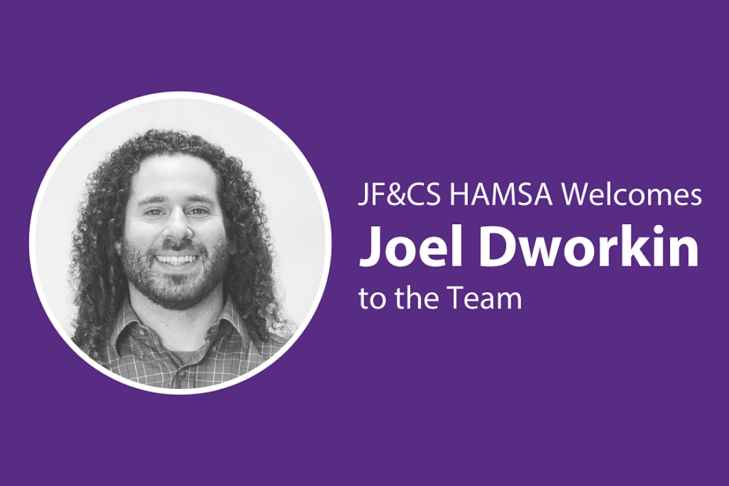 Joel Dworkin may be new to HAMSA (Helping Atlantans Manage Substance Abuse) and JF&CS, but he is not new to addiction in the Jewish world. It was a long journey that brought him to lead the HAMSA program; a road that took him through his own addiction, recovery, life as a recovering addict, and leader in the community. Now, he’s able to use all that experience to help people suffering from alcoholism and addiction and their families.

“I guess you could say everything started in middle school,” says Joel. That was when he discovered a sample box of Vicodin that his father, a dentist, had in a closet. He thought it would be cool to try drugs. Others did it. It felt great. He liked it and it was available. So, he continued to take them.

His early experimentation led to him taking more substances. He and a friend started smoking marijuana that same year. He was intervened upon quickly and court ordered to Al-Anon’s teen program and then a Narcotics Anonymous meeting. As a pre-teen dealing with family of alcoholics and then adults who had long histories with drugs, he couldn’t relate to either group.

A judge also sent him to community service. His parents sent him to therapy. The counselor recognized the need for Joel to see an educational psychologist who sent him for testing. Joel was diagnosed with ADHD, which made a huge difference in Joel’s life.

When he was given Ritalin, it was the first time as Joel puts it, “I had an ‘aha’ moment from drugs. I started to feel immediately better. I could control my thoughts. I could talk to people and control the things I was saying. I started losing weight. My body regulated its temperature better.” Ritalin however wasn’t a simple answer though. It came with an alternative message for a young man. “It was the first connection to me,” says Joel, “that if I had an emotional, physical or mental problem that a drug could be the answer.”

Luckily, the Jewish community rose up to help. “It was Hebrew school teachers and the staff that saw the change in me and tried to address it.” He had a bond with them that continued, even in high school and later. They would cheer him when he was doing well and hold him accountable when he wasn’t. The rabbi, administrators, and teachers were a great support system for him and his family.

Though Ritalin helped Joel control his behavior and the Jewish community supported him, it wasn’t enough to stem his drug use. As he made his way through high school and college, he continued to get heavier into drugs until the consequences of his addiction were worse than the pain of trying to stop. Following his Mom’s 50th birthday party, he confessed to his parents that he was addicted to heroin and needed to get help.

He went to primary care rehab program for a month and then 5 months at a wilderness facility. Wilderness therapy really helped him. The counselors gave him tools to deal with his addiction and his mental health. This training also inspired his interest in outdoor education as a profession and eventually the Jewish summer camp world.

Joel has been clean since 2008 and turned his experience into a positive influence on his and others’ lives. He applied to a job at Camp Ramah of the Rockies where he submitted a resume that included his treatment history. Instead of rejecting him because of his history, the director there found other people in recovery to also interview Joel. He knew they would be more qualified to make a better hiring decision. They hired him.

Joel became a leader at the camp. He helped start a program for the campers about addiction. That led to the director approaching Joel about running a treatment center at the camp in the off-season. The idea energized Joel. He started researching other Jewish rehab centers. He visited Beit T’Shuvah in Los Angeles and went to a wilderness therapy symposium. The result was BaMidbar Wilderness Therapy in Colorado which is still working with people struggling with mental health challenges today.

Though Joel left Colorado, he never stopped leading others and telling his story. As he went back to get his degree in Chicago, he continued to help others looking for answers. Jewish Children and Family Services in Chicago asked him to tell his recovery story, which they published. “I was the only one that sent in their story with my name attached.” As Joel puts it, “that was the only way it works.”

Through his relationship with his girlfriend, and now wife, Rabbi Lauren Henderson, he also became more known in the Jewish community as the person to call when anyone approached a Jewish organization with an addiction program.

Joel and Rabbi Lauren moved to Atlanta last year, where she assumed the role of Rabbi at Congregation Or Hadash. Throughout the pandemic, he continued to help people through all the stages of recovery. “I would speak on different occasions and when someone came to a rabbi with a drinking of drug problem they would say, hold on we’re going to get someone in here that understands,” says Joel. “I told them they could out me to anyone and just give them my number. I wanted to be accessible to them.”

Now that he has joined HAMSA, he is taking the care and support he’s shown other people struggling with addiction to a new level. “Everyone should know about this program. I’ve reached out to Limmud to run sessions and meetings at their annual conference in Georgia. I’m working with Camp Ramah here to talk with the campers and staff about addiction.”

“I have found, when in the Jewish world, because I speak about my addiction and who I am, it has only benefitted me to be open about it. That’s not the way it is for everybody, but I want it to be. It should be the kind of thing where you can tell the rabbi and congregants to say a misheberach for my kid who’s going through rehab.”

“This should be a “casserole disease,” where everyone wants to support you without judgement and the only reason you don’t want to tell the synagogue is because you only want to tell the good cooks, so they’re the ones that bring you casseroles. Everything I do is to get to the point of de-stigmatization so that everyone treats addiction the same way that they treat it if your child is diagnosed with Type 2 Diabetes, or cancer, or any other common disease.”

Through HAMSA, Joel will provide support, resources, and strategies for those seeking help and in recovery. In the last year, HAMSA has seen a huge spike in calls by people in active addiction, spouses and family members. HAMSA is able to refer them to treatment facilities and counselors that can help them through recovery.

Joel will also be working hard to dispel myths about addiction and eliminate the shame so often felt by those struggling with addiction and their families. Through a Jewish lens, HAMSA offers information, Narcan education, sober holiday celebrations and gatherings, Jewish Sensitivity Training for treatment providers and expert clinical support. HAMSA runs groups for people struggling with substance abuse, spouses and other family members, and parents.

If you need help with addiction, know someone that needs helps or want to talk with Joel about HAMSA, please call 1-833-HAMSA-HELPS.