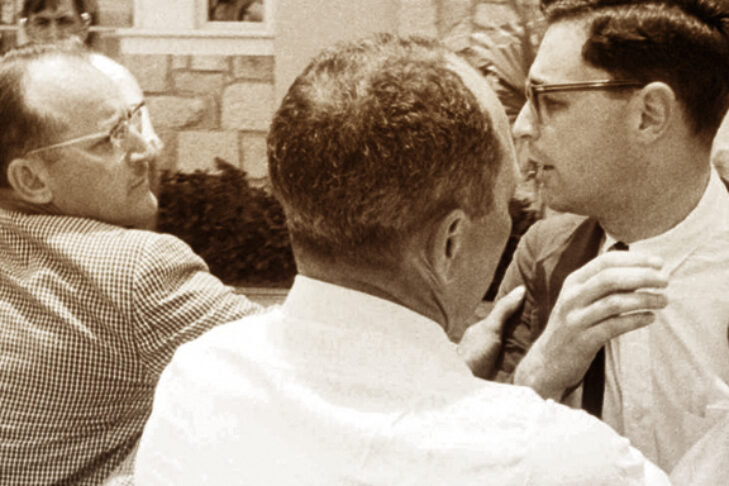 Join us to relive a landmark moment in the history of our nation’s civil rights struggle when 16 rabbis were arrested in St. Augustine, FL, in 1964 in support of Martin Luther King’s request to Jewish leaders to help bring attention to the plight of black people in America.

Demonstrators pray during a civil rights protest in the parking lot of the Monson Motor Lodge in Saint Augustine, Florida.

Three of the rabbis — Sy Dresner, Gerald Goldstein and Allen Secher — will discuss their experiences as part of a unique program co-sponsored by the Southern Jewish Historical Society, The Breman Museum of Atlanta and the St. Augustine Jewish Historical Society. After they have concluded their remarks, noted Jewish historian Stephen Whitfield of Brandeis University will moderate a Q&A with the rabbis.

The arrests on June 18, 1964, now perhaps faded into the backdrop of so many similar instances of heroic efforts to support Rev. King and the broader issue of civil rights, was nonetheless front-page news then beginning with the rabbis’ arrival in St. Augustine, culminating with their arrest for lunching with blacks in a local restaurant, and participating in an integrated prayer in the downtown area.

Rabbis holding a prayer service with civil rights demonstrators in the parking lot of the Monson Motor Lodge in St. Augustine, Florida, in 1964, are attacked by motel manager James Brock

From a jail cell, where they all were kept overnight, the rabbis wrote a letter titled, “Why We Went: A Joint Letter from the rabbis arrested in St. Augustine.” Their words resonate as much today as they did 57 years ago. “We came because we realized that injustice in St. Augustine, as anywhere else, diminishes the humanity of each of us,” they wrote. “If St. Augustive is to be not only an ancient city but also a great-hearted city, it will not happen until the raw hate, the ignorant prejudices, the unrecognized fears which now grip so many of its citizens are exorcised from its soul. We came then not as tourists, but as ones who, perhaps quixotically, thought we could add a bit to the healing process of America.”

Our program will be one of the few in recent years with any of the rabbis who were arrested talking together.