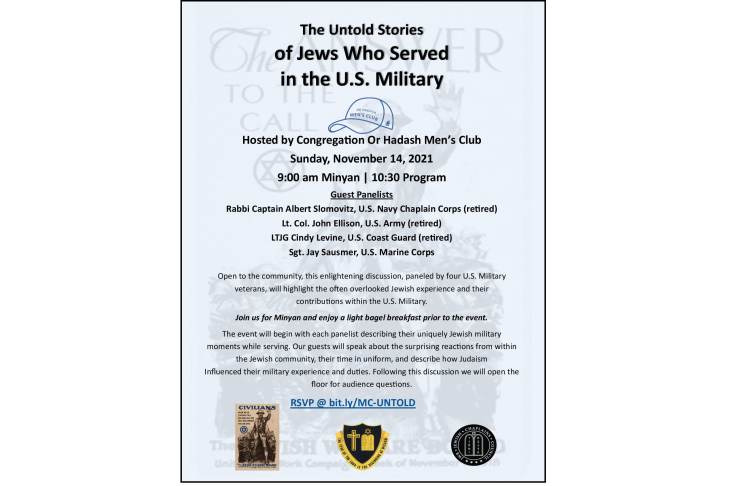 That’s no place for a nice Jewish kid! It’s a lament ascribed to countless parents contemplating their sons or daughters in uniform. Despite that stereotype, Jewish men and women have consistently served in the U.S. Military since the country’s founding. From privates to admirals, potato peelers to chiefs of staff, Jews served at all echelons, in all services, in every imaginable billet.

Jews in green faced discrimination in the ranks, though not necessarily in ways civilians might expect. As Jews and war-fighters, they’ve experienced unique moments – tragic, humorous, and surreal. Through it all, they served, they thrived, and they made history.

The event will begin with each panelist describing their uniquely Jewish military moments while serving. Our guests will speak about the surprising reactions from within the Jewish community, their time in uniform, and describe how Judaism influenced their military experience and duties. Following this discussion we will open the floor for audience questions.

Open to the community, this enlightening discussion, paneled by four U.S. Military veterans, will highlight the often overlooked Jewish experience and their contributions within the U.S. Military. Join us for Minyan and enjoy a light bagel breakfast prior to the event.