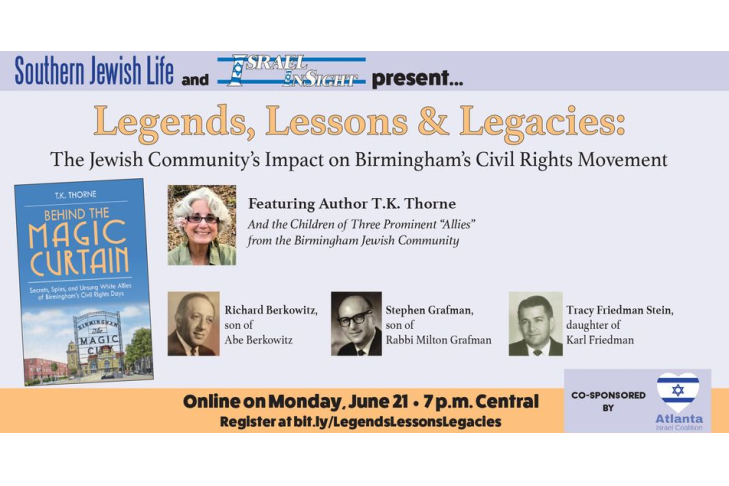 In her new book, “Behind the Magic Curtain: Secrets, Spies, and Unsung White Allies of Birmingham’s Civil Rights Days” (New South Books, June 29), author T.K. Thorne discusses the little-known behind-the-scenes roles played by many white allies in Birmingham during the struggle for civil rights in the early 1960s, including numerous leaders in the Jewish community.

Thorne will discuss her book, joined by the children of three figures she highlights for their bold and brave actions: Richard Berkowitz, son of Abe Berkowitz; Stephen Grafman, son of Rabbi Milton Grafman; and Tracy Friedman Stein, daughter of Karl Friedman. They will offer their perspectives on the leadership their fathers provided during these turbulent times.

The Zoom webinar, moderated by Southern Jewish Life and Israel InSight Editor Larry Brook, will be on June 21 at 7 p.m. Central Time (8:00 pm EST).
Registration is at http://bit.ly/LegendsLessonsLegacies.