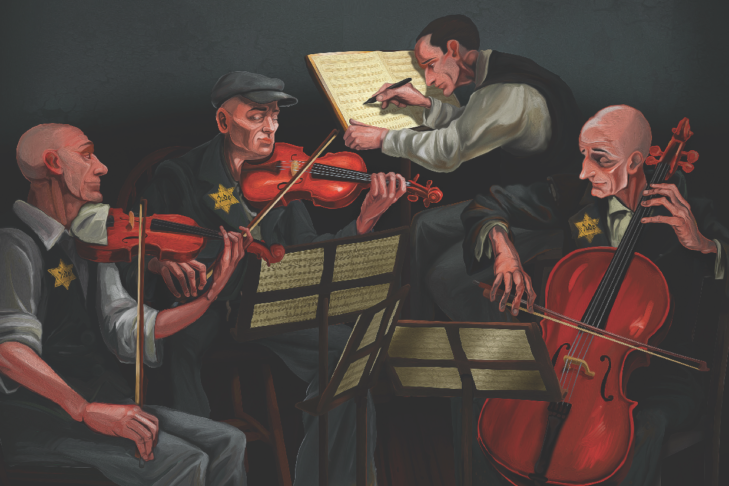 HOURS OF FREEDOM: The Story of The Terezin Composer
Produced by The Defiant Requiem Foundation
Stuart E. Eizenstat, Board Chair

Hours of Freedom dramatizes music by fifteen composers imprisoned in the Theresienstadt (Terezin) Concentration Camp during WWll. Presented as nine chapters with titles including, “Hope,” “Fate,” “Longing,” and “The Eyewitness,” this concert combines music, video, and narrative to showcase works by Viktor Ullmann, Gideon Klein, Zigmund Schul, Pavel Haas, Rudolf Karel, and ten others. The compositions performed portray the agony and suffering of camp life, along with the inspiration, revelation, harmony, and hope that comes through music.

Ahavath Achim cultivates a Jewish community of purposeful belonging. We inspire and support spiritual journeys by deepening relationships with one another. We believe it is at the crossroads of our spiritual paths that life’s purpose and God might be found.

The Defiant Requiem Foundation is a non-profit organization based in Washington, DC, dedicated to preserving the memory of the prisoners in the Theresienstadt Concentration Camp (Terezin) during World War II, who, despite monumental suffering, disease and the constant presence of death, found hope and inspiration in the arts and humanities.

Ambassador Stuart E. Eizenstat has been Chair of the Foundation’s Board of Directors since 2011. Gratefully acknowledging support from The Molly Blank Fund of The Arthur M. Blank Family Foundation.