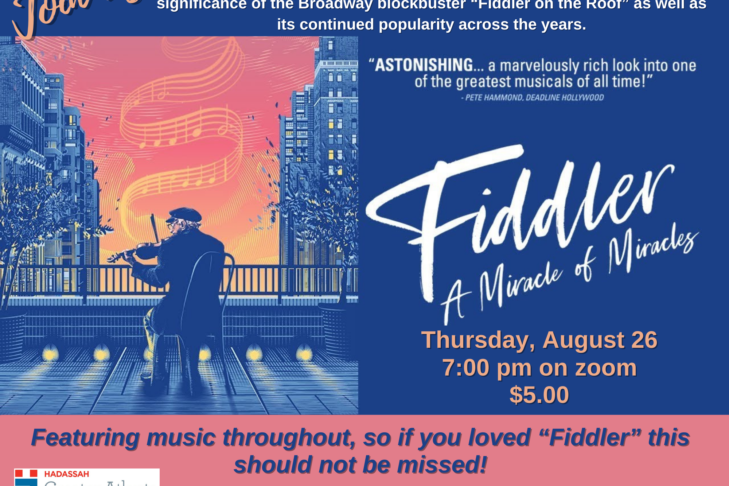 Join Hadassah Ketura for a Zoom viewing of Fiddler: A Miracle of Miracles, the first in-depth documentary that chronicles the story of the international Broadway blockbuster “Fiddler on the Roof” – exploring the unexpected richness of its themes as well as its vast reach across time and cultures.

Fiddler: A Miracle of Miracles is the first documentary to chronicle the complete story of the international Broadway blockbuster musical “Fiddler on the Roof” by exploring the unexpected richness of its themes as well as its extensive reach across time and cultures. “Fiddler on the Roof” is the tale of Jewish immigrants coming to America, of immigrants and refugees trying to escape persecution in their homeland, of the fraying of tradition, generational tension and the loss of roots. Featuring rare archival footage, the documentary also includes personal experiences and insights into the show’s timeless impact from “Fiddler on the Roof” composer and lyricist Jerry Bock and Sheldon Harnick as well commentary from former cast and creative members along with famous fans impacted by the musical, including Joel Grey, Topol, Harvey Fierstein, Harold Prince, Itzhak Perlman, Stephen Sondheim, Lin-Manuel Miranda, and many others.