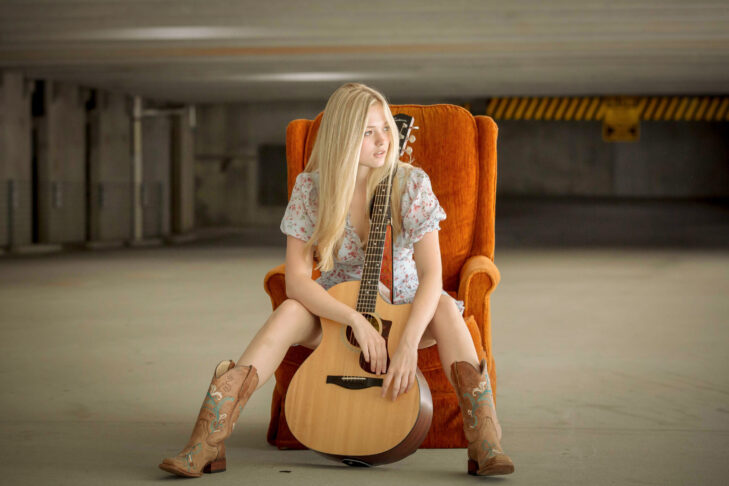 A Georgia native, singer/songwriter Leah Belle Faser has an authentic musical style that crosses many different genres but is grounded in a unique blended sound seasoned with county, pop, rock, and folk influences. Powerful and soulful, Leah’s vocals bring to life the emotion and energy of the thought-provoking lyrics and rich storytelling she delivers through compelling original songs and the songs of favorite artists. In 2020, Leah worked with Grammy-Award winning producer Casey Wood to release her debut EP, Crossing Hermi’s Bridge — now out on all platforms. Leah is a “Teen Artist of the Year” nominee in the 2021 Georgia Country Awards and was also recently named among the “5 Up-And-Coming Women Musicians You Should Know” in Bust Magazine and as one of “Three Acts to Watch” in Wide Open Country. In 2021, Leah was thrilled to be an opening act for Jimmie Allen at the Warner Robins Independence Day Concert, for Christopher Cross at the Woodstock Summer Concert Series, and to be featured at other notable music festivals and events throughout Georgia.  A member of the Junior class of the IB Magnet Program at Campbell High School in Smyrna, Leah can be found playing solo acoustic gigs at venues in Atlanta and North Georgia on weekends. For a schedule, visit www.leahbellefaser.com.

Liz Mannchen fluctuates between being a solo performer and full band performance. With an empowering message to inspire others to be bold, fierce, and wild and to go out and “live as lions,” Liz and the Lions narrates through tales of people, life lessons, experiences, themes, and adventures along their journey with an animated yet meaningful flare of folk and indie-rock music. Liz and the Lions has toured in over 40 countries, recorded six studio albums, and branded their message into a company called Live As Lions. Check it out at www.liveaslions.com! Live Wild & Free, Lions!

Haddon Kime is a songwriter, sound designer, and lyricist, and is currently resident composer at Out of Hand Theater in Atlanta. Haddon usually spends his time behind the scenes of theatrical and film productions, so he is extra excited to have the opportunity to perform some songs for you at Club Hertz Live! Haddon is credited with creating the world’s first original musical designed to be performed remotely over video conferencing software (LAG: A Zoomsical Comedy, produced by Out of Hand Theater). Other original musical adaptations for which Haddon has written music and lyrics include Scapin: A Pop Rock Musical, Wicket: A Star Wars Parody Musical, Frannie the Flamingo (TYA), and most notably The Snow Queen: A New Musical (music and lyrics), which has been produced Off-Broadway as well as London, Sydney and Tokyo. Other Off-Broadway credits include The Atheist (with Chris Pine), Haymarket, The Blowin of Baile Gall and Ring Twice for Miranda. Regional credits include The Red Room: An Underworld Cabaret (music and lyrics) for the Alliance Theatre Reiser Lab, As You Like it and The Death of the Novel at San Jose Rep, A Streetcar Named Desire and Rosencrantz & Guildenstern Are Dead for New Repertory Theatre, and Richard III for Georgia Shakespeare. Haddon is the winner of two IRNE awards for best original music/sound design, a TANNE Foundation Award for Artistic Excellence, and a Reiser Atlanta Artists Lab grant from the Alliance Theatre. Hear Haddon’s work and learn more at www.haddonkime.com.